Suppose you were the director of an organisation that was responsible for bringing tourism into a county and promoting the facilities and amenities in there, wouldn’t you think that the organisation was failing if it couldn’t advertise the DLI enough to get more than 39,000 visitors through the doors? Now, suppose that, as well as being the director of this organisation, you were also on the cabinet that effectively said “sod it, we can’t get the visitors in so let’s shut it”, then wouldn’t you think this was a double failure? Wouldn’t you be asking questions about whether the organisation was actually up to the job? Surely you’d want to know why it had failed, and why you hadn’t done anything about it beforehand? Doesn’t this make you a failure in this role? Shouldn’t you resign because you let this organisation fail? After all, you are a director.

Funnily enough, I’m raising this because this because Councillor Foster (the person you’ll hear talking about the closure in press releases and on the news) is both a director of VisitCountyDurham and also voted as part of the cabinet to close the DLI.

Now, I have just listened to Cllr Foster talking on BBC Radio Newcastle about the closure in a piece where he was rebutting comments from the Save The DLI Museum group. I’d like to address some of his comments in this interview:

“That’s not a figure we’ve said, that’s a figure they’ve aimed for”

I’m sorry Neil (we may call you Neil after all, apparently we’ve met with you so many times – this did come as a surprise to the committee as we’ve never spoken face to face with you), but this is the figure discussed by your chosen council representative, Stephen Howells, with John, Steve and myself (representing the committee). I hate to tell you, but we kept the email correspondence where this figure was confirmed – we’ll happily publish it if you like.

Now, in the piece, you state that there are other considerations we haven’t taken into account about the costs; having discounted the staffing costs, you then state there’s the energy costs – sorry to be the bearer of bad news for you but these aren’t new costs; they are part and parcel of the running costs presented to us. It’s not, it’s 300K INCLUDING the costs. Next time, we can talk about the idea that the lease on the old Rothman’s factory will apparently run out before your 5 year plan for the storage completes, leaving the fate of the exhibits up in limbo. Or we can talk about how multiple departments are supposedly competing for space in this same location (for those who aren’t aware, this factory is the location of the “state of the art” storage facility). Or, perhaps, you’d like us to discuss the plans for the Aykley Heads business park extend to cover the current DLI museum. That’s the beauty about councils – dig deeply enough and you can find all sorts of interesting, official, council produced and sanctioned documents.

I appreciate that it’s been a little while since we last posted something – but we have been insanely busy over the last couple of weeks. Saying that, it’s good to stop and reflect, every now and again, why we are doing this campaign.

As I look through the posts this morning, one in particular stands out. Stuart Swinney has this to say:

The more museum’s we get rid of the more history is lost and as we erode our history our youth will never understand the horror of war and when the history vanishes the fear will vanish setting our children up to repeat the disaster of another world war a war I may add that would be so large in loss of life that it would make WW1 WW2 look insignificant in comparison, we have a duty to provide the museum to the next generation and shame on us if we lose this valuable resource,and let’s not forget what these brave men and women did for us and our continued armed forces still do for us ,save the DLI museum .

And that perfectly sums up why we are campaigning. It’s easy to hear arguments that 600,000 visit Palace Green each year, but how many children will be taken to see the exhibitions? What will happen to the larger exhibits? How long before the exhibition is allowed to moulder away in a dusty cupboard, only seeing the light of day when researchers deign to dig into a single item?

Sunday 29th of November 2015; for many, they may remember this day as being a day of terrible weather, with storms battering the country. For others, well this day will be remembered as the day that we stood together in freezing, wet and blustery conditions to show our support for the DLI.

After a brief, but poignant, period of reflection lead by bugler and padre, aided with brilliant effect by historical re-enactors, the participants were encouraged to get to know each other.

For my part, it was great to meet so many enthusiastic supporters of all ages – from the very youngest to the slightly less youngest :). I was particularly delighted to meet Mark Wakenshaw and his family. This really made what we are doing personal for me – Mark’s grandfather being such a towering figure in the collection. 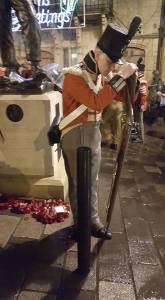 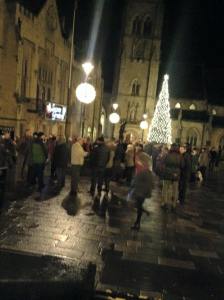 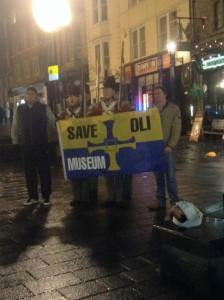 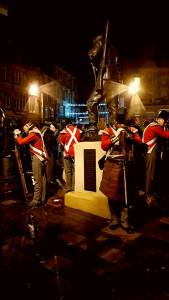 This really is a fantastic community. One of the things that really impressed me when we kicked off the campaign to save the DLI is how many people volunteered time, services, talents and venues. There was no hesitation and no cajoling. When they heard about the proposed closure people stepped up and said “Not in my name”. This is something that DCC seemed to have lost sight of; the community spirit is still strong here in the North East.

I’d like to take this opportunity to single out one particular venue. Sherburn Village Working Mens Club immediately, and without hesitation, offered us the use of a room for committee meetings. We had our second meeting there last night and it was just fantastic, how warmly we were greeted. From the committee, I thank you. And for everyone else who offered there time or services, I thank you.

One of the questions we get asked, with some frequency, is “Can the collection not move to Beamish?” I thought I’d take this opportunity to answer this particular question.

Many people will remember that Frank Atkinson, director of the museum when it first opened, said “you offer it to us, we will collect it”, and assume that this means that Beamish would be open to keeping the collection open. Unfortunately, this is not actually the case.

It’s important to understand that the remit of Beamish is to cover life in the North East with particular relevance being placed on the years 1825 and 1913. These years have been chosen to offer a snapshot of life that covers a range of years of interest to Beamish. The DLI regiment, on its own, ran from 1881 to 1968 (the history of the Durham’s goes back much further – the 68th Durham Regiment of Foot (Light Infantry) goes back to about 1780), putting it outside the years that are of particular relevance for the museum.

Assuming that Beamish did choose to house the display, where would they display it? Let’s make no bones about it, the DLI collection is vast; a proud testament to the bravery and discipline of a regiment that was always deployed “in the thick of it”, never afraid to take a stand. As anyone who has been to Beamish will attest, there’s not much dedicated museum space, rather the museum is the representation of village life, the colliery, etc. So, the first thing that would have to be done is have a new museum put in place – this would have to be a large building and would be a huge expense for Beamish to cope with.

Obviously, our big driver is keeping the collection together and available for all to view,so Beamish couldn’t just choose to show a subset of the items. 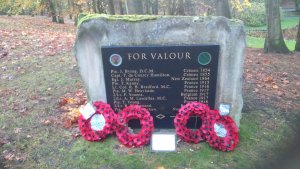 Today saw a sombre, close-knit Armistice Day vigil at the DLI Museum in Durham where, amongst those paying their respects to the fallen, where members of the ‘Save the DLI Museum’ campaign committee, and Jonathan Swingler of BBC Look North & Cumbria.

Jonathan kindly contacted us ahead of today’s remembrance and arrived to do a piece with the campaign leader, John Stephenson, after the service.

During the interview with the BBC John discussed the reason’s for the campaign, talked about how the fundraising and group figures, and detailed our thoughts and feelings on the decision of Durham County Council to close the museum and the ‘plans’ in which they have for it. 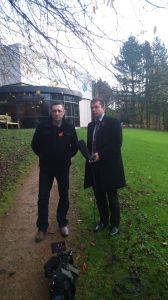 Don’t forget you can support the ‘Save the DLI Museum’ campaign by making a donation via the crowdfunding account HERE so we can help keep the memory alive. 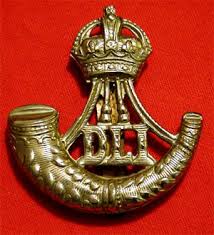 Produced last year writer Rachel Cochrane visited the Always Remember, Never Forget World War I exhibition where stories inspired by, for her the ‘Sweetheart Pincushion’ which is encompassed by the poem ‘Butchers Lad Billy,’ and the ‘Pickelhaube German Military Helmet,’ both of which are housed in the exhibition.

On Remembrance Sunday Rachel Cochrane delivered a newsletter which led with the following: “During this period of Remembrance for those in the armed forces who have died in the line of duty for this country, I revisit the podcast of stories and poems inspired by the WW1 collections at the Durham Light Infantry Museum.  This may prove to be a tribute to the Museum itself in the light of sad news that it is to close next year.”

The above podcast (22:43) is very much worth a listen to those with a penchant for their local history and to those who care about the life, history and heritage of the Durham Light Infantry.

The readers on the podcast most certainly give the DLI their own voice and takes you back to what once was, and should always be.

A message from Rachel Cochrane reads: “It’s great that the work will,be appreciated by a wider audience and I hope help the plight of the DLI in the process.  Please let me know further details about the campaign. Good Luck and Best Wishes.”

Don’t forget you can support the ‘Save the DLI Museum’ campaign by making a donation via the crowdfunding account HERE so we can help keep the memory alive. 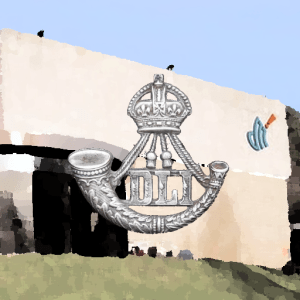 Help boost the ‘Save the DLI Museum’ fund by clicking on the link provided below and donating as little as £1 to help fund the cause. All funds raised will go directly to help finance any legal and accountancy services needed in such a battle.

We believe in this, and so should you, after all, it’s your heritage, your history, your heart as well so click HERE for more or copy and paste the link below

All articles published in the print press pertaining to the suggested closure of the DLI Museum can be found via their respective links.

‘DLI Museum closure should not be rushed‘

‘Victoria Cross Heroes’ families back campaign to save DLI Museum‘